Sellers! You can feel the paces to the peak season is getting onto the street. Pretty soon it will be knocking on your front doors…

Here are some good indicators showing US housing market carries great momentum from 2017 to 2018: 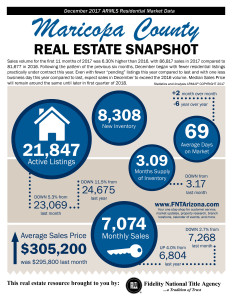 Cap rates are still around 4.0% – 5.0% to begin with for the first year. With the steadily increasing rent, consequently cap rate will improve year-over-year.

Absorption rate is the percent of sales that are sold each month of the inventory. A higher percent means that inventory is moving at a faster rate, and thus is a Seller’s market. The total absorption rate for metro Phoenix is at 37% for the month of March, 2017.

Certain areas of the metro have higher performance of absorption rates, they are —

The luxury homes sector, $1 million and more, has the lowest absorption rate at 7% only.

According to the Stress Management Center and Phobia Institute in Asheville, North Carolina, an estimated 17 to 21 million people in the United States are affected by a fear of this day, making it the most feared day and date in history. Some people are so paralyzed by fear that they avoid their normal routines in doing business, taking flights or even getting out of bed.

The number of property transactions decline on Friday 13. Research by FindaProperty.com found that between 2005 and 2012, there were 43 per cent fewer transactions on Friday 13 compared to other Fridays in the month.

The worst day was May 13 2011, when there were 51 per cent fewer transactions. Ironically, these transactions are likely to run more smoothly given that the staff handling them, in solicitors firms and banks, will have more time on their hands.

Property bargains are more likely to relate to houses or flats numbered 13. Number 13 houses are not that common – property website Zoopla found only 28 per cent of streets have one.

90% of US skyscrapers do away with floor number 13, according to reports by the Otis Elevator Company, the world’s largest elevator manufacturers.

The 32nd President of the United States, Franklin Roosevelt, never traveled on a 13th and refused to have a meal with 13 people at the table.